Marilyn Moriarty’s essay, “The Taking of Dead Horse Hollow: Eminent Domain Abuse” appeared in the Spring, 2013 issue of The Antioch Review. In it, Moriarty narrates the story of one family’s—the Jenningses—multiple fights with taking authorities over many years. In 2010, the court sided with the family in its suit against the Virginia Department of Transportation. “The trial represented the culmination of a process the Jenningses have endured for fifty years.” Here, Marilyn Moriarty provides backstory on her essay.

Listen to Marilyn Moriarty read from her essay.

I used the bridge long before I knew its story. In the early nineties I moved to Virginia for a tenure-track job and drove to Florida at least once a year to visit family. Over the years I came to know well the segment of I-77 discussed in my essay. East-west Interstate 81 and north-south Interstate-77 intersect in Wytheville in the southwestern part of Virginia. About five miles from the cloverleaf, the interstate highway bridge crosses the New River. I used to love crossing the river southbound, coming down out of a curve as open sky flooded the windshield, woods dropped away on either side, and acceleration tempted the car into thinking it was a plane. Other times, northbound, the bridge marked my 90 minutes from home. One year, crossing northbound, I looked down at the river and caught a glimpse of a brick house immediately below. Even at the odd angle, the charm of its pitched roof, gables, and lovely green yard attracted my eye.  The contrast between the charming house and its siting in the shadow of the bridge made me wonder about the inhabitants. Who would choose to live under the interstate?   After I met Edd Jennings, I understood that no one would:  the state imposed that miserable bridge upon the family. I say “miserable” bridge although I have been the beneficiary of it and the entire interstate network. But if you consider the lay of the land in its less developed state, the siting of the bridge between two family houses appears as an act of deliberate cruelty. A black and white photograph from the 1966 trial (below) shows the family’s two houses with the tenant cottage between them. The main residences would fit at either end of a football field. 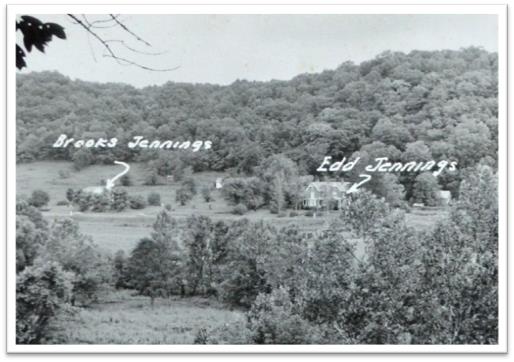 A contemporary photograph (below) shows the same land at a slightly different angle. Explosives blasted out the V in the hills. Emerging from foliage in the lower right, the red chimney appears on a white roof: Edd Jennings’ house. On the other side of the bridge, Brooks’ house appears as a patch of white between piers.

When I asked Farmer Jennings why the bridge was sited exactly between two houses–couldn’t engineers have moved it a little to the left or a little to the right?– he replied, “Someone just drew a line on the map. Probably, to them, houses were just little dots.” With a dotted line marking the route, a photograph from the 1966 trial seems to confirm his conjecture. After the highway filled in the dotted line with the highway, Jennings had to take the tractor on state road 52, which runs in front of the house, because the cleared area offered the only access to the upper farm.

Photo showing the proposed Route 77 through the property.

I still wonder why someone labeled the walnut tree.

I had been wanting to write something about the bridge ever since I had seen it and the farm up close, in 2008, after I met Edd Jennings when he struck up a conversation in the history aisle of a local Barnes & Noble book store. A few years later, when I came across a literary magazine’s call for essays on the theme of true crime, I asked Jennings if he could use that opportunity to write about his life-long battle with takers. After all, he read a lot, had written and presented speeches to the legislature, and completed several manuscripts about wilderness trips to the arctic. Before he declined, he asked, “Can the state of Virginia commit a crime?”

The bridge that splits the Jenningses’ property.

I was the sort that thought anything taken for the common good must have been rightfully taken. I grew up in a military family, my father a decorated veteran of two wars.  I went to Catholic school for seven years. My immediate family felt no shame about being distantly related to Reubin Askew, the 37th governor of Florida, known for his integrity. Growing up with rules all my life, I had some confidence in structures of authority. So I found Jennings’ question about the state’s ability to commit a crime thought-provoking. The trial proved that yes, the state can commit a crime, but the heart of the issue for me lay in the many paradoxes about the exercise of power, and how we understand the relationships between the common and individual good.

Eminent domain allows that the common good trumps the individual good. That concept is easier to support if the need for a sacrifice has not been imposed on you in particular. When property is seized for eminent domain, the property owner is dragged into court as a defendant with the government setting the price on the property. No subjective values can be factored into the transaction. Land is conceived only as real estate. In America, historically, our ideals of liberty and self-determination are tied to the ability to own property. The forced/enforced conversion of land into real estate rips apart the conceptual relationships people have created with other people, with their world,  and with their government, and  it wrecks the story we tell ourselves about what it means to be an American. The taking process turns human beings into ciphers and homes into dots on a map. As the common good is appropriated in the argument of oppressors, individual humanity becomes stripped in the exchange. That lack of humanity was embodied in the siting of the bridge, a permanent object lesson about the prerogative of power.

I love roads. I love travel. A road promises an unobstructed path for desire. Road trip stories saturate our culture. Even the internet is conceptualized as an information highway. I love roads, yes, especially the beginning of every trip, when I leave just before dawn as a slate gray  sheen supplants night,  the horizon gradually lifting like a gate where the sun floods  through. The road spot lit down the way issues an invitation. My heart lifts. A music of the road starts in my head.  But now, I appreciate that every foot of road, every inch, and every fence post once belonged to someone else — who may have wanted to keep it. Every mile might mark a trespass. In Ursula le Guin’s 1973 story, “The Ones Who Walk Away from Omelas,” a fictional city exists where everyone’s happiness is balanced on the abject misery of one child and every citizen has full knowledge of the condition of their bliss.  I feel trapped by the paradox that to walk away from Omelas, I would have to take a road.

Marilyn Moriarty is a professor of English at Hollins University (Roanoke, Virginia). She is the author of Moses Unchained (winner of the A.W.P. Creative Nonfiction Prize) and the textbook, Writing Science through Critical Thinking. Her fiction and nonfiction have been published in Faultline, The Kenyon Review, Mondo Greco, Nimrod, and Quarterly West as well as in other literary journals and anthologies. Her work has also been awarded several literary prizes. (Photo)