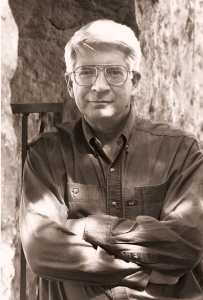 We recently interviewed Rick DeMarinis, whose story “Afternoon in Byzantium” ran in The Antioch Review, 2014 summer all-fiction issue and garnered the Review recognition as a finalist in the fiction category of the 2015 National Magazine Awards from the American Society of Magazine Editors.

The story is about the death of Winston Harp, a retired car salesman who has been falling into dementia. Through several perspectives—that of Winston himself; his wife; his wife’s boyfriend, who also happens to be his former business partner; and the policeman who responds to the scene of his death—we learn not only about the story behind his death, but how that story is shaped and appropriated by those around him.

AR: “Afternoon in Byzantium” is about a lot more than the death of an unambitious car salesman. It is about—among other things—our complicity as humans in the things that happen to us, whether intended or not. Can you talk about what you wanted to accomplish in this story?

RD: Stories, good stories, are always about more than they at first seem. The writer has an inkling about these unexpected things, an inkling that becomes clear when the first draft of the story is complete but usually not before. Here’s what I mean by that: the END_OF_DOCUMENT_TOKEN_TO_BE_REPLACED

We grieve the recent passing of Mark Strand, one of America’s great poets. Strand was published numerous times in The Antioch Review since the appearance of his first poem in 1961, just a few years following his graduation from Antioch College. Strand was an important and long standing member of The Antioch Review’s Advisory Board. His influence will be missed. According to Editor, Robert Fogarty, there are few among the poetry literati as dedicated to the art, as Strand. Fogarty recalls that even as a student he resisted the enforced regimen of Antioch College that required students to spend semesters in co-op programs away from the college.  “Mark always wanted to stay at school and continue to work on his art and literature,” Fogarty reflects. “Yet, during one co-op term he worked at a hospital in Cleveland and was particularly affected in a positive way by having to care for children with polio.”

Following is a 2007 interview with Strand conducted by Lenny Emmanuel that appeared in The Antioch Review’s Winter, 2009 issue. We are publishing the interview in full as a small tribute to Strand’s long-term presence and influence.

Mark Strand And Lenny Emmanuel At The Trestle 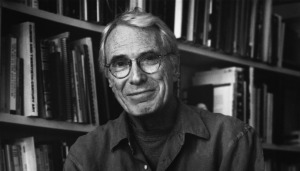 Mark Strand walks into Don Justice’s class, and I think of Lord Byron, as Mark is strikingly handsome. He’s at least six feet tall, with dark brown hair that tends to be wavy, he has dark brown eyes, is well built with the body of a football player, perhaps of an offensive end with long, strong arms, shoulders, and with, as they say in football, “hands” that could hold onto the pigskin. He’s wearing a light blue-to-gray, short-sleeved shirt, jeans, and well-worn shoes. He says something privately to Don Justice and starts to leave the classroom. Someone in the class (I’m watching Mark) passes a poem forward called “Tree Surgeon” which he or she has dedicated to Mark. Mark reads the poem, passes the poem back without comment, and leaves the room. It’s the first time I’ve seen Mark Strand, but I’ve heard he is cryptic, aloof, and inaccessible. That afternoon I return to our apartment on North Dubuque Street and relate the episode to my wife Len, who innocently asks, “Who is Mark Strand?”  I explain and say firmly, “I will definitely stay away from him. He would not be a friendly reader.”  On two or three occasions during the next semester, Mark attempts to speak with me, but I am cryptic, aloof, and inaccessible. A year or so later, in 1965, Mark leaves for Rio de Janeiro with a Fulbright lectureship. Having been trained as a clinical chemist at the U. of Miami, I accept dual appointments in pathology and English at Indiana University’s Medical Center and in English at Indiana University in Indianapolis. My wife, children, and I leave Iowa City. About 20 years later, Mark reads in Indianapolis, and we meet for dinner, during which he makes a startling comment, “Lenny, I am no longer a poet.”  I immediately reply, “No, Mark, you will always be a poet.”  At that time he was at the University of Utah, and I don’t see Mark again until November 28, 2007.  END_OF_DOCUMENT_TOKEN_TO_BE_REPLACED

In 1982, the Antioch Review published its first story, “Actors,” by Peter LaSalle. Since then, we have published fourteen others. A sixteenth will appear on our pages in 2015. Three of these stories, “What I Found Out About Her,” Winter, 2008, “In the Southern Cone,” Spring, 2009, and, “Tunis and Time,” Winter, 2007, are included in LaSalle’s new book, What I Found Out About Her: Stories of Dreaming Americans, which received the 2014 Richard Sullivan Prize in Short Fiction and has just been released. (See the book trailer here.) The Richard Sullivan Prize in Short Fiction is administered by the Creative Writing Program in the Department of English at University of Notre Dame in conjunction with The University of Notre Dame Press.

The pre-publication endorsements for LaSalle’s new collection recognize it as a truly significant work. Author Zulkifkar Ghose says that it “…flows with such masterly ease that he can be said to be in a class of his own, at the forefront of American creators of original prose.” Jay Neugeboren has written that these tales “…are shrewdly original, disarmingly complex, and—always, always, since LaSalle is one of our finest storytellers—as beautifully crafted as they are memorable.”  END_OF_DOCUMENT_TOKEN_TO_BE_REPLACED